Another Watford Friendly but not with the best outcome. ☹

Rob Kent helped arranged a friendly with his QPR team close to the Loftus Road stadium today.  QPR were a bare 6, so we played 6-a-side 12 min quarters with 3 outfield subs rotating.  This makes a little more difficult so most likely going forward we will look for 7/8 players for 6-a-side fixtures, and 9 players for 7-a-sides.

This makes it 30 different players from outside the League squad playing so far.  If you haven’t played yet and want to, you need to make yourself available early!

Game was played on a Powerleague type venue with wide low goals, side and back boards keeping in play and height limited to 4 ft, so slightly different rules of engagement.  QPR are a well drilled, 2 touch football type side, and a relatively young team with average age of around 53.  The Watford team had an average age of 60 years 1 month 🙂 and at times it showed.  5-0 down in the 1st Q, we never recovered!  However, to our credit we kept going playing in good spirit and only lost the last 3 Qs 7-1!  The fact that Ken scored our only goal and Steve Harrington (in goal) was our man-of-the-match says it all!

In the end its fair to say we were beaten by a good team in a game played in good spirit with no fouls and limited running (see photo below).  Of course it will be completely different for the return at the larger Meriden pitch with narrower goals…although they claim they were missing their best 2 players! 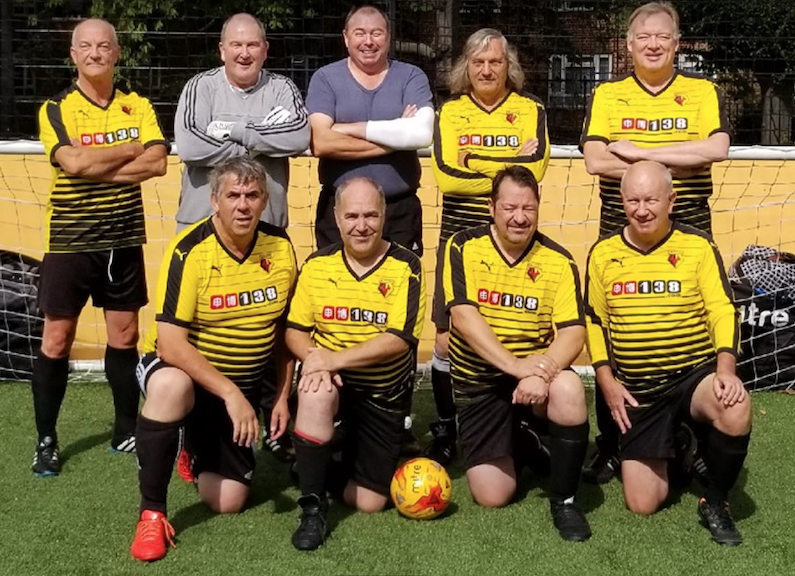