Amigos Last Stand at the Meriden?

A traumatic 24 hours for Jürgen, the Amigos and their many fans. It all kicked off literally early Thursday afternoon when the Police – for safety reasons – locked down the Amigo’s home ground Harefield…this must be a first for Walking Football? Conscious of fans pre-booked travel plans the Amigo’s executive strived to find another suitable ground to host this local derby with Watford. The Meriden Centre came to the rescue and agreed to host this battle of Hertfordshire’s finest.

The anxiety evidenced by the Watford squad’s facial expressions was palpable as your Amigos Captained by Will took to the field. Watford were coming into this match as WFA Over 60s National Cup holders but now they were meeting a team that had put both Luton and Barnet to the sword in recent weeks.

Alas, all didn’t go to plan for the Amigos who had frustrated Watford despite their dominant first half display. Watford huffed and they puffed but the Amigo’s stood firm. As half time approached proven goal scorer Howard Harris took advantage of a rare Jürgen error and shot through the coach’s legs past an unsighted Richard Cable. A groundsman later confirmed a divot in the 4G may have a contributed, but Jürgen was swift to apologise to his teammates and has subsequently booked into the highly rated Ken ‘Kempes’ Littleboy’s combined school of Martial Arts & Football. Howard beware!

In the second half, attempts on goal were limited but lone striker Simon Evans beat England keeper Kevin Schmid only for the goal to be disallowed as the referee had blown his whistle at the time of Simon striking the ball. A great pity the advantage was not played. Will McCafferty and Paul Currie saw shots narrowly miss the target. Mick Harty probably the Amigos most consistent player during this campaign gave no quarter at the back.  In midfield Steve Moss battled gallantly as Watford pressed. A hallmark long range shot from Gary Shaw narrowly missed the Amigo’s post. George Ferrar was making his second appearance for our Boys as he continues his journey back from a long-term injury.

Hearts were broken when a fresh legged Tony Beal smashed the ball into the top right-hand corner. Fans shouted VAR for potential running in the build up to this goal, but Stockley Park did not see a clear and obvious error on the part of the referee, so the goal was allowed to stand.

Richard Manning also recovering from injury made a cameo appearance towards the end of the match but by this time Watford had parked the bus.

On the night the better team won, and the Amigos congratulate Ged and his Boys together with wishing them luck in the National Finals held at the end of Sep.

As for the Amigos, Jürgen praised his charges for their commitment, effort and support. They can be proud of their achievements and we are confident they will build on the many positives evidenced in their play.

Picture on the right, Jürgen leaving hospital this lunch time courtesy of Sky Sports News. He is expected to be out of the game for the next month. 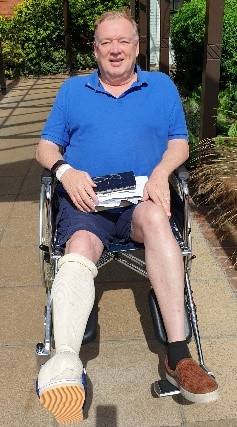