A double tournament weekend! After the success of the Watford mixed gender squad yesterday, Watford Friendly team attended the Cheshunt 7 team 7-a-side round robin tournament this afternoon.  A late withdrawal from Rushden was followed by an SOS call from the organiser Jonathan Sands for an additional team and referees!  Gary amazingly rounded up a team of what ended up being a full 9 to enter as Watford A, us being Watford B.  With Kevin already guesting in goal for us, Jonathan (Cheshunt 1st team keeper) guested for Gary.

Very competitive games with 3 0-0s, a 1-1 where we led for a while, and a tight 0-1 loss to the Watford A. Unfortunately, the 3pts win, 1 pt draw did not help us so we came 6th.  We had two goals disallowed for allegedly “running”, however the ref is always right. I can say that as I helped Jonathon out by refereeing 4 matches when not playing.  The team was rotated regularly such that everyone played in every game for at least a half, most racking up total playing time of 5 games out of 6. I know this because my legs are throbbing…goodness know how Andy is after yesterday as well!

The team played with a fixed 4 and rotated other positions to keep a strong team.  This paid off well with 4 wins, 2 draws and no losses. Unfortunately I was not counting the goals scored but rumour has it Howard scored more than one – he did sneak the one that beat us which several thought was in the area (?). These results were enough for them to win the tournament!

Congratulations to all our winners. 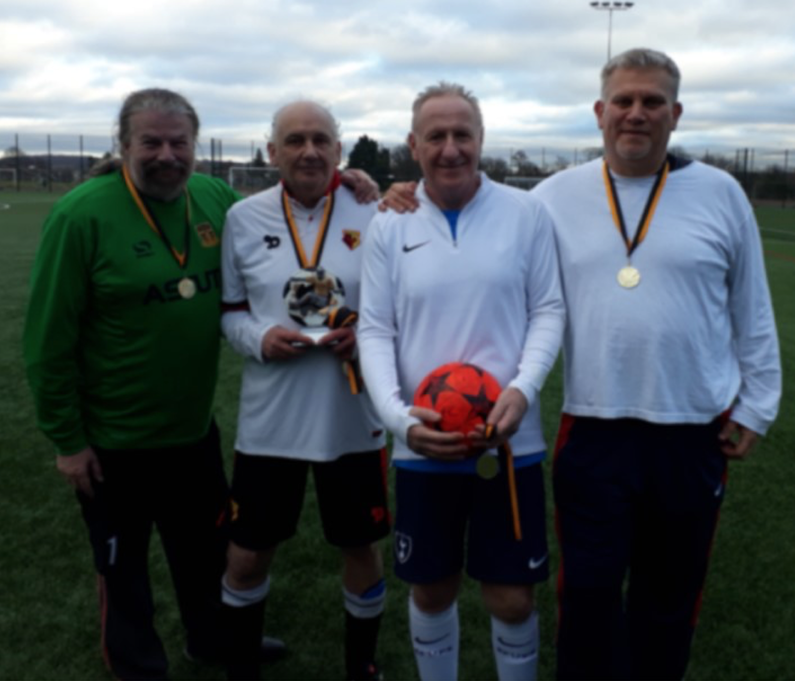