Following the successful conclusion of the Spring Middlesex FA Walking Football League competitions for Over 50s and 60s, the teams from the three leagues (West, Central and North) joined together for the inaugural Middlesex FA Walking Football League County Cup at the Rectory Park facility.  The 50s were split into 2 groups of 5 with the top two in each group going through to the semi-finals; the 60s played in a single group of 6 with the top 4 into semi-finals.  Watford were well represented by teams in each competition PLUS providing two referees, Alan Read and Bill Newsome, to look after the two 50s leagues, semi-finals and final.

Over 60s (report by Andy Roads)

A sunny afternoon in Northolt saw us entered into the inaugural Middlesex FA County Cup for over 60’s walking football, I had taken the decision to try and play players who had represented us in the Middlesex Central League over the past 4 months and despite a couple of enforced changes due injuries this was achieved with the exception of the goalkeeping spot where Richard Cable made his debut due to both David Nelmes and Malcolm Wright being injured and what a very capable replacement he proved to be on the day.

With the top four teams going through to the semi-finals our results saw us (2nd in group) through to play against the old enemy Uxbridge (3rd) and in this match we played probably the best football of the day winning 2-0 (Alan Cutter and Howard Harris getting a goal each).

On to the final against group winners Cove in what turned out to be a very, very, tight match. 0-0 at full time, 0-0 after extra time and on to the dreaded penalties. Three penalties each to be taken and if necessary sudden death thereafter and as with the match itself the penalties went to the wire, firstly Gary Shaw stepped up, hit the target with a good penalty only to see the keeper somehow make the save, Cove scored giving them the advantage. Next up Pat Morrisey who dispatched his penalty, up stepped Cove to score again so still with the advantage. Next was Howard Harris and again he scored to draw us level so all Cove had to do was score and the cup was theirs but this time it was Richard Cable turn to make the save and so into sudden death. The ever cool, calm and collected Allan Cutter stepped up to dispatch his penalty and now we had the advantage, another save from Richard Cable and the cup was ours. I would also like to point out that every member of the eight man squad made an appearance in the final and made a contribution to the final result.

Throughout the day every member of this squad contributed, from Richard Cable who was solid in goal, Richard Manning, Pat Morrisey and Andy Roads who rotated the defensive duties pretty successfully (only one goal, excluding the penalty shootout scored against us in seven matches) to the creative Gary Shaw and Alan Cutter who created numerous chances for the lively forward play of (6 goal) Howard Harris and Maurice Wagenfield who often created the space for him (both were also press ganged into midfield roles at various times). I think today showed the importance of balance to a squad and a positive attitude, we all know the importance of a good goalkeeper and people who are likely to get you goals but having players around them who can do the ugly bits, produce creative opportunities and are comfortable in taking responsibility either going forward or defending is also key.

Of course winning the cup was the ultimate desire but I would like to pay tribute to every member of the squad, to the effort and desire they put in and the manner in which they played this tournament, which in my opinion was exactly how walking football should be played (except maybe my rugby tackle of the Cove Centre forward, but hey ho the ref realised he was trying to bully me by backing in and gave a drop ball – even this was done in good spirit but certainly one I got away with!) it was competitive but not overly, every player gave 100%, no sniping, no arguing when players were rotated out for a match and no complaining when players were substituted and most importantly every player played with a smile on their faces even during those matches/ parts of matches where we did not play at our best.

After much talking at the recent AGM about attitudes, ego’s etc this for me was the perfect answer and I for one (hopefully not the only one!) thoroughly enjoyed the whole day and to top it off this was an officially sanctioned Middlesex FA County Cup that will be engraved with the winning team each year and Watford Walking Football over 60’s will for ever show as the first winners of this trophy. 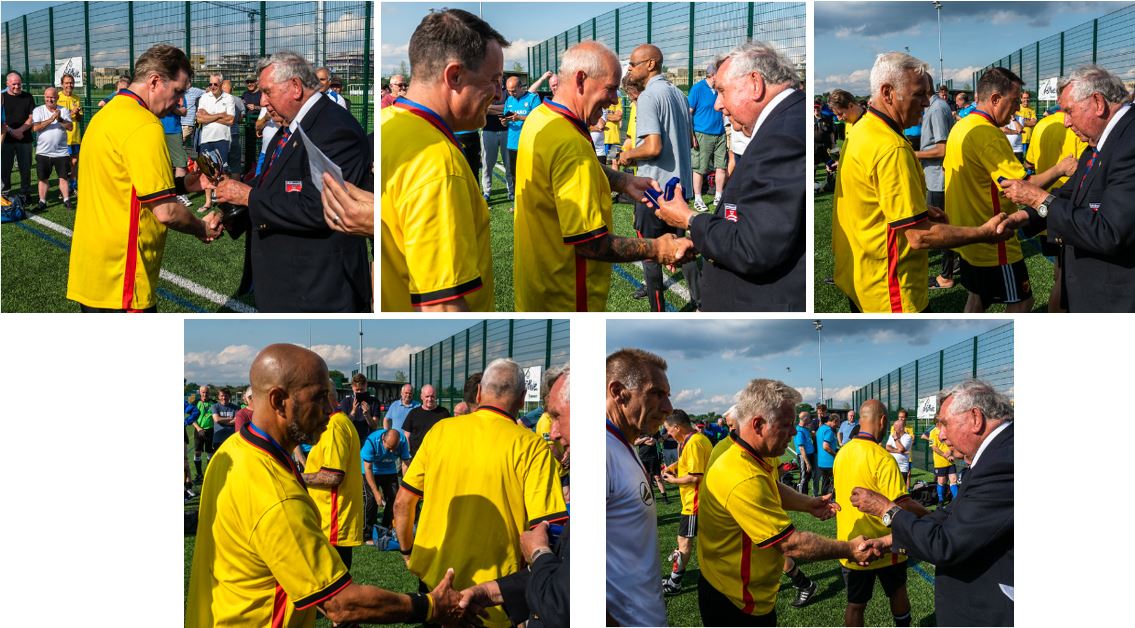 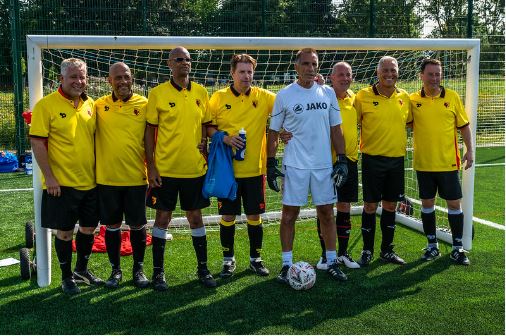 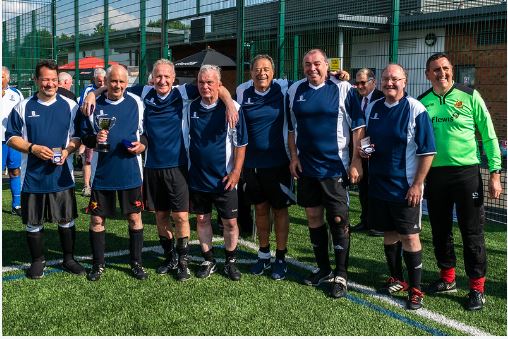 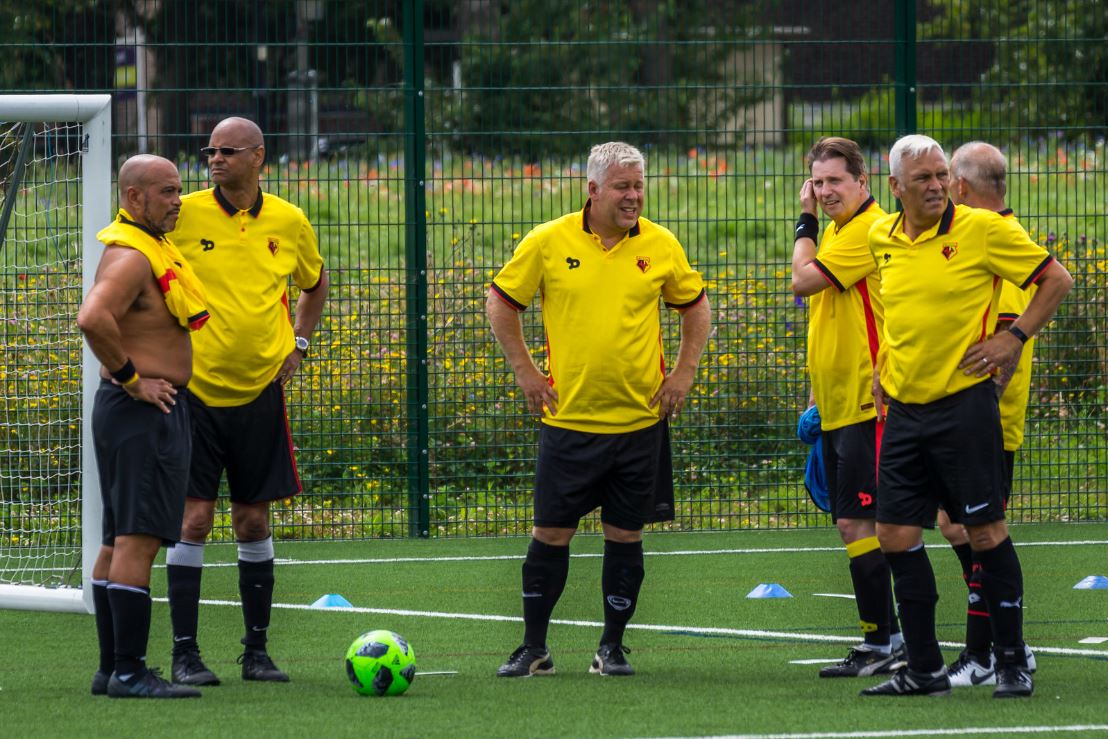 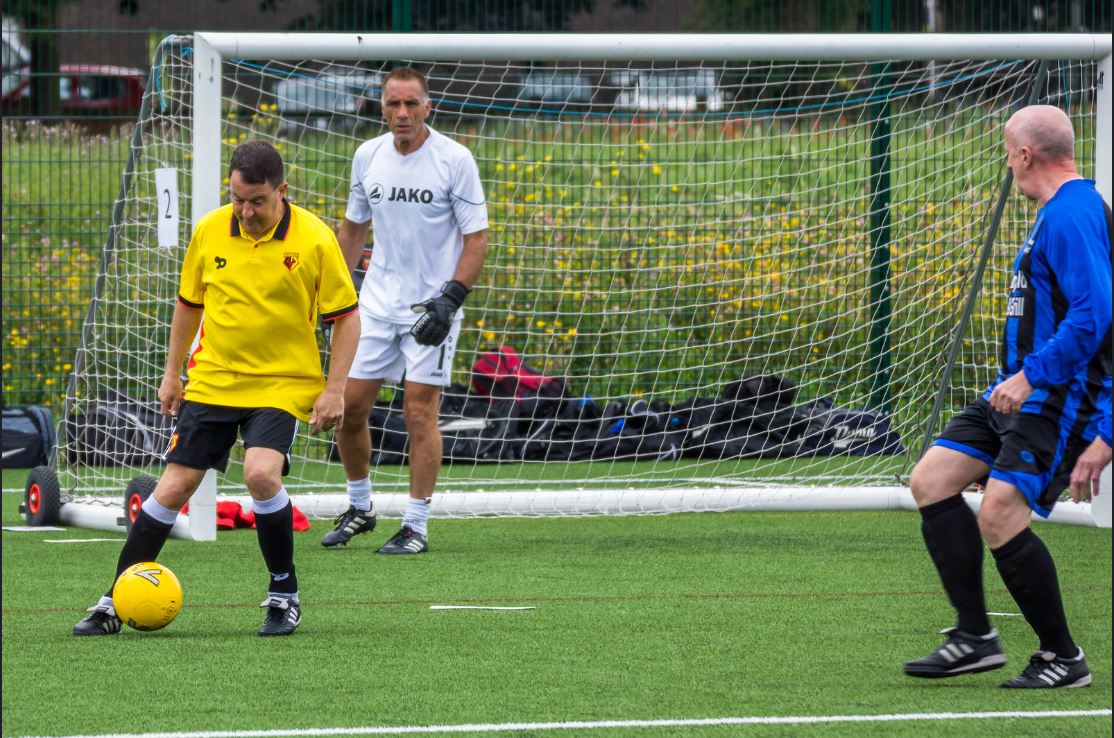 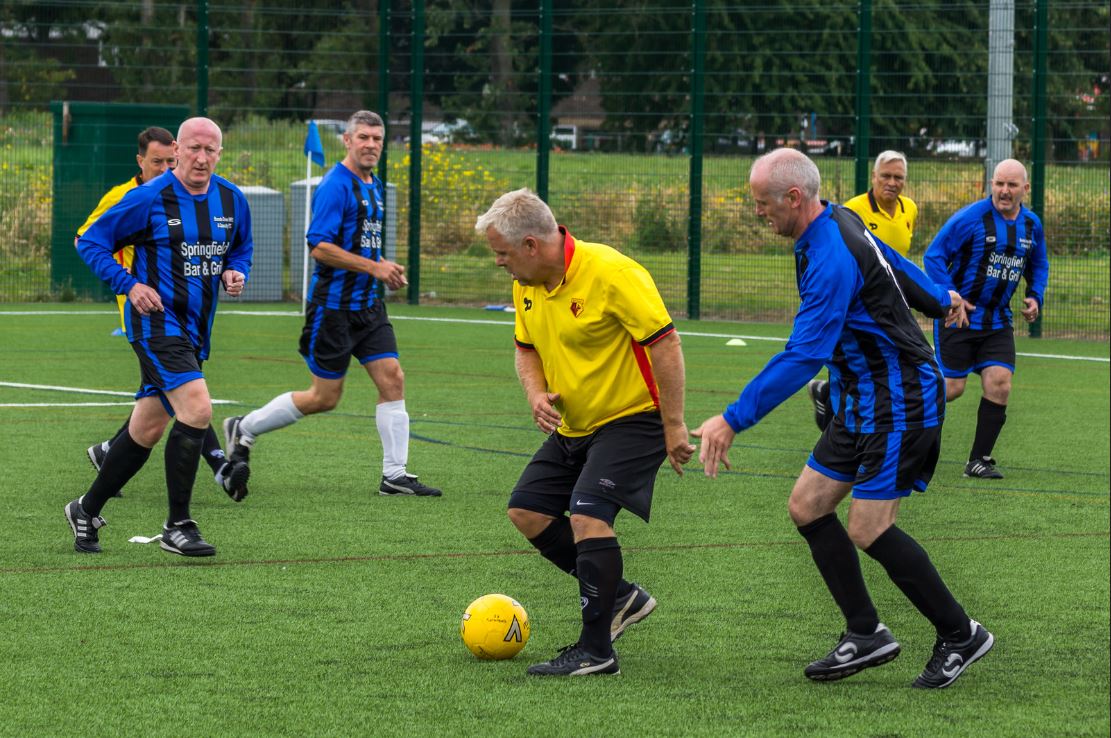 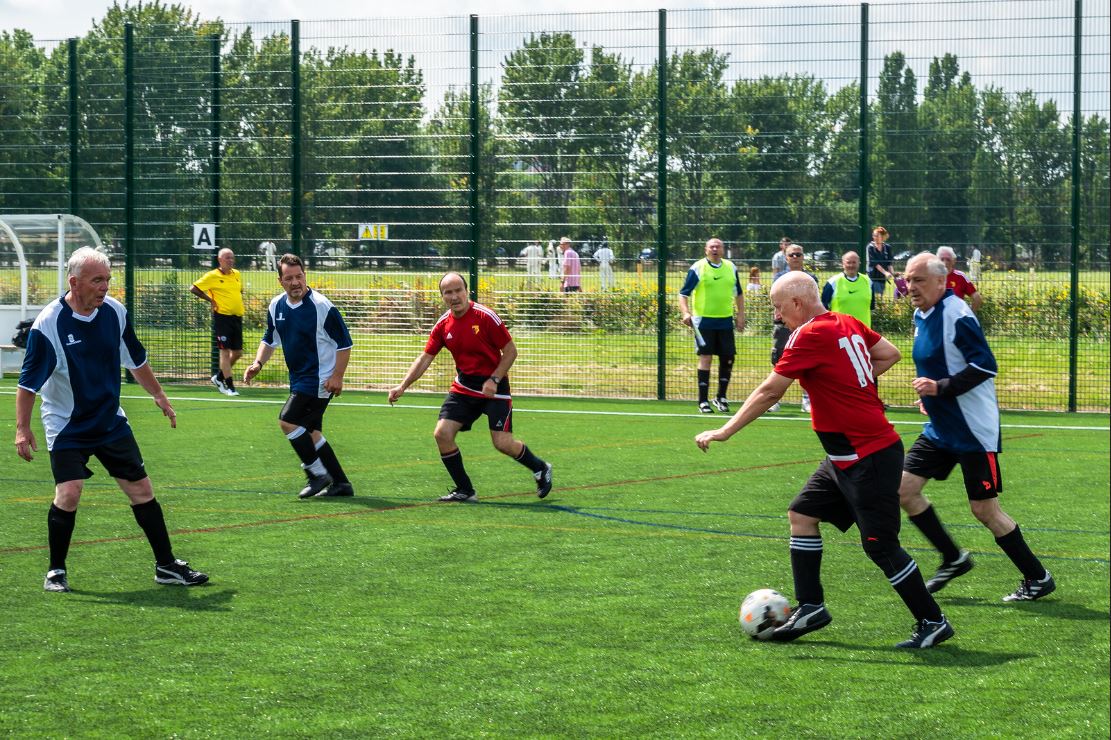 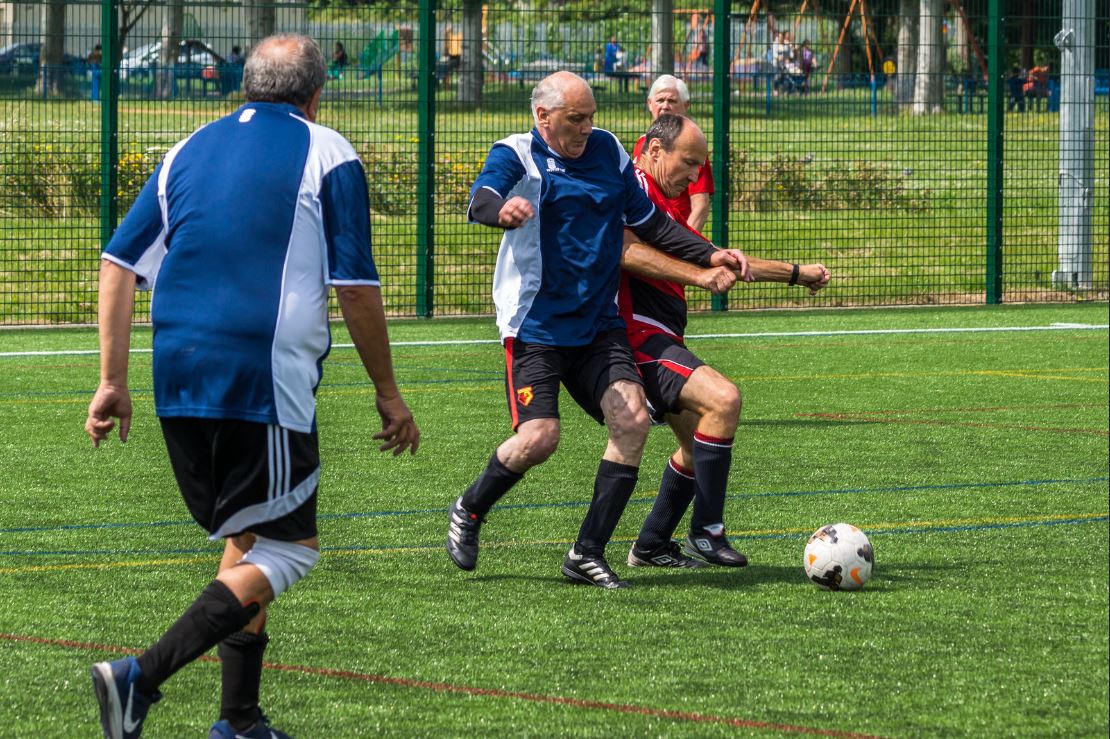